Language, Indigenous Knowledge and Cultural Landscapes of the Ainu 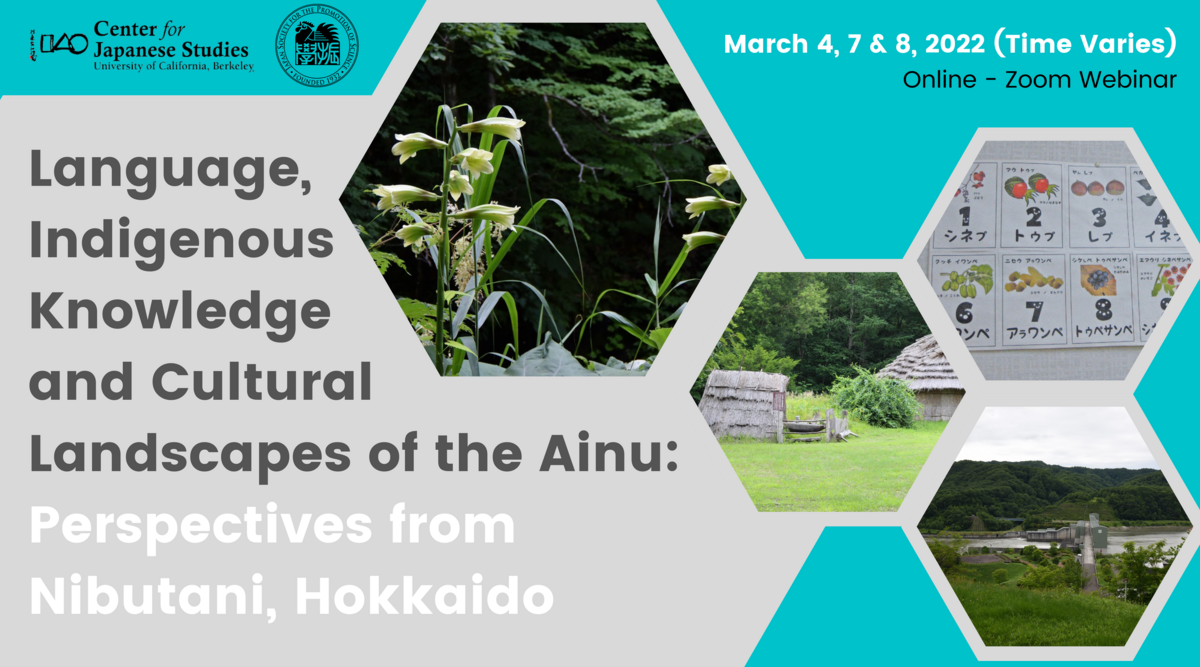 Japan Society for the Promotion of Science,
San Francisco

Phoebe A. Hearst Museum of Anthropology

Language, Indigenous Knowledge and Cultural Landscapes of the Ainu: Perspectives from Nibutani, Hokkaido

The Center for Japanese Studies of the University of California, Berkeley, and the JSPS (Japan Society for the Promotion of Science) San Francisco Office are pleased to present a three-day online lecture series by speakers from Nibutani, Biratori Town, Hokkaido. Recent discussions of indigenous rights highlight the critical roles that indigenous cultural landscapes, traditional knowledge and indigenous languages play in restoring the identity of indigenous peoples and promoting diversity, equity and inclusion. Three distinguished speakers from Nibutani present lectures on their ongoing efforts and future perspectives to revitalize the Ainu culture, language and cultural landscapes. Each presentation is followed by comments from a scholar working on aspects of Ainu and/or indigenous cultures and languages.

Shiro KAYANO, born in Nibutani, Biratori Town, Hokkaido, is Director of the Kayano Shigeru Nibutani Ainu Museum. He is also Executive Director of the Nibutani Ainu Language Class, member of the Biratori Town Council, President of the Ainu Language Pen Club, and councilor of the Foundation for Ainu Culture. As an Ainu elder who has deep knowledge of Ainu culture and language, he has actively spoken up about Indigenous rights of the Ainu, including the right to receive Ainu language education.

Kenji SEKINE, born in Hyogo Prefecture, is Director, Ainu Culture Learning Section, Board of Education of Biratori Town. He moved to Nibutani in 1998 and married an Ainu artist, Maki SEKINE. Together with Maki, he has been an instructor of the Ainu language at Nibutani Ainu Language Class for children. In collaboration with the Maori in New Zealand, he has adopted the Te Ataarangi method to teach the Ainu language. He annually organizes Ainu language camps in Nibutani, and gives Ainu language seminars at many public schools in Hokkaido.

Koichi KAIZAWA, born in Nibutani, Biratori Town, Hokkaido, is President of Biratori Ainu Culture Preservation Association, Member of the Permanent Indigenous Peoples Committee (PIPC) of the FSC (Forest Stewardship Council) Asia-Pacific Region, and former Chairperson of the National Trust Cikornay. As an Ainu farmer and landowner in Nibutani, he was one of the two plaintiffs of the Nibutani Dam Lawsuit. He is co-editor of Restoring Rights of the Ainu: A New Vision of a Society to be Built Together with Indigenous Peoples (2011, Horitsu Bunka-sha, in Japanese).

Indigenous Rights and the Importance of Ainu Language Education

Article 13 of the UN Declaration on the Rights of Indigenous Peoples states: Indigenous peoples have the right to revitalize, use, develop and transmit to future generations their histories, languages, oral traditions, philosophies, writing systems and literatures, and to designate and retain their own names for communities, places and persons”. However, domestic regulations for Ainu people to be able to study the Ainu language at public institutions and public schools have yet to be established in Japan. The Ainu language is essential to transmit the Ainu culture and oral traditions to the next generation. Because language is inseparable from culture, the meaning of each word conveys its cultural background. This presentation introduces the history and practice of Ainu language education in Nibutani.

I am one of the few Ainu teachers in Japan. I have classes in schools and for children in Nibutani which is the largest Ainu community. I am also hosting conversation-focused sessions online and offline. We are working on language revitalization with almost no public funding. And, due to the long history of oppression and discrimination, ethnic awareness among Ainu is not strong. However, I am aiming to realize a society where everyone speaks Ainu. I will talk about the current status of Ainu language education.

The Ainu and the Problems of Dam Construction

In April 2019, the Japanese parliament passed the New Ainu Law, recognizing the Ainu as an Indigenous People of Japan for the first time (Act on Promoting Measures to Realize a Society in Which the Pride of the Ainu People Is Respected). Unfortunately, however, the law is still colonial in nature, as it does not restore indigenous rights, such as fishing rights and land rights, which are core components of similar legislation in other countries. Despite the opposition of local residents, construction of a dam that destroys our cultural landscape and heritage continues to take place as a public project. The voices of local residents should be respected.