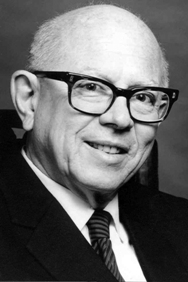 Robert A. Scalapino, Robson Research Professor of Government Emeritus at the University of California, Berkeley, renowned worldwide for his many accomplishments in the field of East Asian studies and distinguished career at Berkeley spanning six decades, died Monday, November 1, 2011, in Oakland, of complications from a respiratory infection. He was 92.

Scalapino received the Berkeley Medal, the campus's highest honor, in 1999, and the Berkeley Citation for Distinguished Service in 1990. His accomplishments include founding the Institute of East Asian Studies in 1978, one of Berkeley's largest and best endowed research units, where he was director until his retirement in 1990. He remained active at the Institute well into his 90's. From 1949 to 1990 Bob taught in the Political Science Department at UC Berkeley. He was department chair from 1962 to 1965 and Robson Research Professor of Government from 1977 until 1990. He received his B.A. degree from Santa Barbara College (later to become U.C. Santa Barbara), and earned both his M.A. and Ph.D. degrees from Harvard University.

Scalapino was born on October 19, 1919, in Leavenworth, Kansas, but the family moved to Santa Barbara in the summer of 1929 where his father took a high school teaching job. Midway through college, he decided to specialize in politics and international relations between the United States and Europe. But then came Pearl Harbor. He soon began to train as a Japanese-language officer at the Navy Language School in Boulder, thus planting the seed for his eventual immersion in East Asia. In his memoirs, Bob wrote that he started his college teaching career precociously in 1940 in order to pay for tuition for graduate school. He was only 20 — too young to date his female colleagues, the youngest of whom was 35 — but he began to notice an attractive girl, Dee Jessen, who was staying in her seat after class. They struck up a conversation and he offered her a stick of gum, "my only transferable possession," which eventually led to an invitation to go "ocean fishing," but only "with an escort." Bob and Dee married in 1941 and remained married for 64 years until her death in 2005. They raised three daughters: the late renowned poet Leslie Scalapino (Tom White); Diane (Barry) Jablon of Los Angeles; and Lynne Scalapino of Berkeley.

Scalapino published some 553 articles and 39 books or monographs on Asian politics and U.S. Asian policy. These include Democracy and the Party Movement in Prewar Japan (1952), Parties and Politics in Contemporary Japan (1962), Communism in Korea (two volumes, with Chong-Sik Lee, 1972, for which they received the Woodrow Wilson Award), Asia and the Road Ahead (1975), Modern China and Its Revolutionary Process (with George T. Yu, 1985), The Politics of Development: Perspectives on Twentieth-Century Asia (1989), The Last Leninists: The Uncertain Future of Asia's Communist States (1992), The United States and Asia: Lectures at Peking University (2002); and most recently, his memoir, From Leavenworth to Lhasa — Living in a Revolutionary Era (Institute of East Asian Studies, 2008). He was editor of the seminal journal of contemporary East Asian politics, Asian Survey, from 1962 to 1996.

Professor Scalapino was the recipient of numerous research grants under such auspices as the Guggenheim Foundation, Social Science Research Council, National Endowment for the Humanities, Henry Luce Foundation, Earhart Foundation, and many others. He was awarded the Order of the Sacred Treasure from the Government of Japan, the Order of Diplomatic Service Merit, Heung-in Medal from the Government of Korea, and the Friendship Medal from the Government of Mongolia. He also received many awards from universities and non-governmental organizations, including the Medal of Highest Honor from the Graduate Institute of Peace Studies at Kyung Hee University, the Distinguished Alumni Award from U.C. Santa Barbara, and the Japan Foundation Award. He was made Honorary Professor at Peking University, and at the Center on Northeast Asian Studies in Mongolia. Most recently he was given the Award of the Ambassador of Dialogue by The Polish Asia Pacific Council.

Professor Scalapino was a Fellow of the American Academy of Arts and Sciences and was a founder and first chairman of the National Committee on U.S.-China Relations. Between 1965 and 1980, he was a member of the State Department Advisory Committees on East Asia and on China. At the time of his death he was a member of the Northeast Asia Cooperation Dialogue, the Board of Trustees of The Asia Foundation, and the Advisory Boards of the Atlantic Council, the Pacific Forum-CSIS, and the National Bureau of Asian Research. He has served on the Board of The Asia Society and is Director Emeritus of the Council on Foreign Relations, the National Committee on U.S.-China Relations, and the Japan Society of Northern California, among many others.

An indefatigable world traveler, Bob made 62 trips to the People's Republic of China, on four occasions as a visiting professor at Peking University. He had two separate one-year residences in Japan, and made numerous trips to the Republic of Korea, Taiwan and all parts of South and Southeast Asia. He traveled no fewer than four times to North Korea, serving as head of Asia Society delegations, and recently, in 2008, to Mongolia where he led a delegation of four Berkeley faculty members. He presented the Dyason Lectures in Australia in 1969, the Kennedy Lectures in New Zealand in 1980, and the Rajiv Gandhi Lectures in India in 1990. On one of his last trips, at age 88, Bob traveled extensively in Tibet, where furnished with an oxygen container he was able to ride on yak — back up the mountain to Mindroling Monastery in the eastern part of the region.

Donations in Robert Scalapino's memory can be made to the "Robert A. Scalapino Fund" at IEAS, benefitting undergraduate students at UC Berkeley with an interest in East Asian studies. (Contact Daniel Ureste at dureste@berkeley.edu.)