Back to CJS Conference Archive

Since March 11, 2011, images of the earthquake, tsunami and nuclear accident served as markers that generated massive media attention and transformed our understanding of "disaster." The symposium will explore how the cinema, literature and media of post-3/11 Japan reframe the images of disaster in order to create a new type of literacy about survival and precarity. What new vulnerabilities are made legible by the transpositions of historical trauma into the post-3/11 environment? What becomes of communities and individuals in times of catastrophe? What are the framing effects of media on the impact of the 3.11 disasters within and beyond Japan?

As part of the symposium, the Pacific Film Archive (PFA) will be screening the documentary NUCLEAR NATION (2012) on Friday April 4th at 7pm followed by a post-screening discussion with the director Funahashi Atsushi.

On Saturday April 5th (from 9am-6pm) the symposium will commence with panel presentations examining the roles of cinema, literature, and media in organizing information and collective agency, and of the arts, in general, in raising awareness of 3.11 issues related to nuclear energy, survival and sustainability.

Lisette GEBHARDT, "Japanese Literature after Fukushima – Between Protest and ‘Healing'"
For over two years the Japanese literary scene has been dealing with the Great East Japan Earthquake (Higashi Nihon daishinsai) and its consequences. Japanese authors and artists see it as their task to find words that — "after Fukushima" — somehow measure up to a catastrophe of such an historic scale. In the meantime there has been a great outpouring of poems, short stories, essays, and novels or other longer prose pieces, thereby offering an interesting body of so-called "catastrophe literature" (shinsai-bungaku).

In an attempt to categorize the texts, one can identify two main themes: healing and protest. The protest category attends to the longstanding responsibility of the nation in the realm of atomic power and argues against a "Japanese system" whose failures are not limited to the damaged nuclear plant in Fukushima, insisting that a day of reckoning has arrived. The healing fraction seeks above all to show solicitousness, to encourage the victims and, with a biblio-therapeutical approach, to clear a horizon of hope for the future of the nation. In this presentation, I will explore the role of Japanese writers as public intellectuals, the political positions that these writers assume, as well as the impact of their works on the shifting contours of the "Post-Fukushima" literary field.

YUKI Masami, "Ecocriticism and Literature after Fukushima"
The nuclear accident at Fukushima Daiichi in March 2011 exposed various interrelated aspects of Japan's sociopolitical environment. One such aspect is the curious correlation between the locations of Japan's nuclear plants and rural environments known as satoyama, a mosaic of forests, mountains, arable land and human settlements. Like the exploited English pastoral countryside, which has been so vital to the first-wave environmentalism of the 19th century, satoyama has come to play an important but ambiguous role in shaping the critical horizons of ecocriticism in post 3.11 Japan. On the one hand, satoyama has been suffering from the effects of de-population and economic degradation, conditions that made the construction of nuclear plants an attractive economic buoy. On the other, satoyama is increasingly gaining attention as an ideal eco-tourist destination due to its symbiotic socio-ecological environment. Though seemingly unrelated, this double aspect of satoyama reflects something of the colonial and postcolonial realities of modern Japan.

I would like to explore the implications of this double-faced reality of post-nuclear Japan from an eco-critical approach, examining literary works that responded to the accident at Fukushima Daiichi, including works by Kawakami Hiromi, Takahashi Genichiro, and Taguchi Randy. I would also like to examine a curious tendency in post Fukushima literature that brings Fukushima into dialogue with Minamata, another iconic site of disaster in Japan's environmental history. The emerging comparative framework that sees Fukushima through the lens of Minamata, I argue, poses new challenges and possibilities for understanding the ongoing discussion of the interface of humans and the environment.

Jonathan ABEL, "Letters, Quake, Media: Comparing 1923 with 2011" This paper compares the ways pundits and theorists talked about disaster and the media in 1923 after the great Kanto earthquake and in the wake of the triple catastrophes of 3-11. Despite the putative advent of new media, concern for mediation itself comes to the fore during both crises. However the rapid speed of the more recent mediations of disaster and combined with problems specific to the reporting of radiation have made writing on 3-11 a distinct discourse of its own. What can we learn from the past about the present crisis? What can the present help us understand about the historical one?

Mary KNIGHTON, "Disaster's Comic Affects: The Representational Crisis of 3.11"
At the two-year anniversary of 3.11, NHK broadcast a documentary interview between psychiatrist Saito Tamaki and mangaka Shiriagari Kotobuki. Prominently featured was the collection, Manga Ever Since: 2011. 3. 11 (「あの日からのマンガ 2011.3.11」), wherein Shiriagari interpolates amidst his comics a newspaper account and visual documentation of his fact-finding and volunteer trips to Tohoku soon after 3.11. Traveling there both for Asahi Shimbun and as a private citizen, Shiriagari's role unexpectedly expanded to "public mangaka" and journalist. Before intellectuals, politicians, or the public could form a consensus on the Event, already Shiriagari was criticized for figuring tragedy, fear, anger, and most of all, an absurd break (zure) within the everyday. His 3.11 manga grapples with social justice and the aesthetic and ethical issues of representing the Event and its victims in real time. Shiriagari's uniquely dark and cynical voice emerges between the extremes of silly gag humor in four-frame comics that include the artist himself and the speechless panels of his special feature manga on Fukushima and Tohoku. Shiriagari's representational crisis can be read within a lineage from Nakazawa Keiji's Barefoot Gen and Yamagishi Ryôko on Chernobyl, inevitably bound up in thorny questions of whose disaster it is and what kind of political and affective investments are possible when a crisis is both unfolding and repeatedly disavowed.

Ryan COOK, "Fiction Film after Fukushima"
In less than three years, approximately 300 nonfiction films about Japan's 3/11 disasters (including television documentaries and shorts) have been produced. Of those, nearly a third have primarily or substantially addressed the effects of the Fukushima Daiichi nuclear disaster, or the risks of nuclear power and radioactive contamination more generally. In contrast to this abundance of documentaries (many with admittedly limited distribution), there has been a notable scarcity of fiction films that depict stories of 3/11, especially of Fukushima. A variety of factors have been offered to explain why the media climate is not conducive to fiction: from the pressure to exercise self-restraint, respect the suffering of those most affected, and let a sufficient amount of time pass, to the rhetoric that has made filmmakers vulnerable to the charge of propagating (especially economically) "harmful rumors." This talk will consider a handful of films that, in spite of such pressures, have deliberately used fiction as a means of confronting the challenges and fears of Fukushima. Placing these films in the context of earlier cinematic hibaku fiction (including Kurosawa's 1955 film I Live in Fear, as well as the more recent Tokyo genpatsu of 2004, among others), the talk will examine both common themes and differences. Fictional representations that have taken a more oblique approach, including the sensationally popular 2013 NHK "asa dora" series Amachan, will also be considered. The talk will ultimately examine the stakes of cinematic fiction in relation to the disaster.

David SLATER, "The Work of the Visual in Mourning the Dead in Post-Tsunami Japan"
3.11 was probably the most minutely documented disaster in history. And yet for all of these images, the impulse to archive representations of loss points to another set of images that have themselves gone missing: hundreds of thousands of family photo albums that were washed away by the tsunami. This talk addresses the various issues that have been raised therein, including the anxiety and ambivalence surrounding the uncontrolled circulation and handling of other people's photos; the role of the visual in the larger project of the 'work of mourning;' and the problems of politics and representation when these pictures end up in galleries around the world.

Ryan Cook (Cinema, Harvard University)
Ryan COOK is a postdoctoral fellow at the Reischauer Institute of Japanese Studies at Harvard University. He is currently working on a manuscript that traces the cultural and intellectual contexts of cinema in postwar Japan, and how they responded to the changing media environment and the political upheavals of the 1960s.

Atsushi Funahashi (Film Director)
FUNAHASHI Atsushi is a filmmaker. He directed the documentary Nuclear Nation and is currently working on Nuclear Nation 2.

Marilyn Ivy (Anthropology, Columbia University)
Marilyn IVY is a professor of anthropology at Columbia University. She is the author of a number of works concerned with modernity in Japan and the question of culture. Her book Discourses of the Vanishing: Modernity, Phantasm, Japan won the Hiromi Arisawa Memorial Award in 1996. She has published essays on Japanese folklorism, neonationalism and criminality, contemporary art and youth, photography and marginality, and theories of mass culture. She is currently working on a project about aesthetics and politics in the post-3.11 present.

Aaron Kerner (Cinema, San Francisco State University)
Aaron KERNER is an associate professor of the Cinema Department at San Francisco State University. He was the recipient of an NEA grant for his exhibition Reconstructing Memories (2006). In 2011 he published Film and the Holocaust (Continuum) – an extensive survey of narrative, documentary and experimental representations of the Holocaust.

Mary Knighton (Manga, College of William and Mary)
Mary KNIGHTON is an ACLS/SSRC/NEH International and Area Studies Fellow at the Virginia Foundation for the Humanities and a visiting faculty at the University of Virginia. Her research attends to global modernism and postwar Japanese literature, with a special interest in women writers and feminist theories of race, class and gender.

David Slater (Anthropology, Sophia University)
David SLATER is an associate professor of cultural anthropology in the Faculty of Liberal Arts and the Graduate Program of Japanese Studies at Sophia University, Tokyo. He has published works focusing on social media, information and political activism in Japan's 3.11 Crisis.

The film "Nuclear Nation" will be screened at the Pacific Film Archive (PFA) Theater. Find the PFA Theater in this campus map. 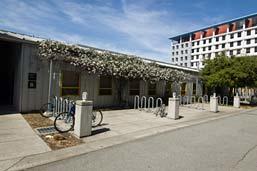