The Berkeley Japan Prize is a lifetime achievement award from the Center for Japanese Studies to an individual who has made significant contributions in furthering the understanding of Japan on the global stage. 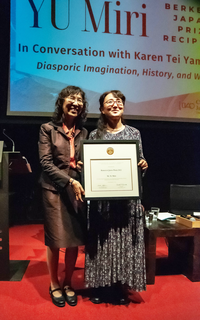 YU Miri, a citizen of South Korea, was born in Tsuchiura, Ibaraki, Japan, in 1968 and grew up in Yokohama. Her 1996 novel Family Cinema received the Akutagawa Prize in 1997. The English version of her recent novel Tokyo Ueno Station won the 2020 National Book Award for Translated Literature in the U.S.

The works of YU Miri have brought critical attention to the challenges of socioeconomic inequality, ethnic discrimination, gender discrimination, and everyday precarities that continue to shape the life of the minoritized and traumatized, while conveying the scale of historical trauma through their intimate focus on the suffering of individuals and families. YU’s 2004 novel End of August, whose protagonist was modeled after her marathon runner grandfather, vividly describes the injustice, indignity and hardships that he, his family, and many other Korean people had to suffer during and after the Japanese occupation of Korea. YU’s Tokyo Ueno Station was conceived as a link between the pain of homeless people in Tokyo’s Ueno Park, whose families disintegrated after working away from home for too long, and the pain experienced by the evacuees after the Great East Japan Earthquake and the Fukushima Daiichi nuclear power plant accident of March 11, 2011.

While YU’s books depict harsh realities and the pain of individuals under extreme conditions, underlying her writings is a sense of hope. By advocating for individual freedom and dignity, her books continue to give courage to many people around the world, both young and old, who struggle to survive and fight against social injustice, exclusion, and inequity. 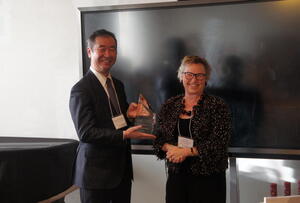 Takaaki Kajita received the Nobel Award in Physics in 2015 along with Arthur B. McDonald. Thanks to his research in the Super-Kamiokande neutrino observatory, an experimental facility in a mine in Japan, Kajita detected measurement deviations in neutrinos created in reactions between cosmic rays and the Earth's atmosphere. This discovery helped prove that neutrinos have mass, which led to the rethinking and revising of the Standard Model of particle physics.

Kajita's success reflects his own remarkable abilities and the birth of Japan's international intellectual leadership in ‘Big Science’, which drew on the nation's technological prowess, from delicate glass production to mining and tunnel construction. 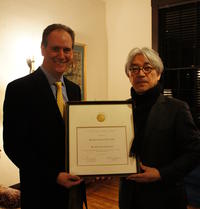 Ryuichi Sakamoto began his career in 1978 as a founding member of the Yellow Magic Orchestra, and emerged as a pioneer in electronic music. He began acting and composing for film with Merry Christmas, Mr. Lawrence (1983). His score for The Last Emperor (1987) won him an Academy Award for Best Original Score, Golden Globe Award for Best Original Score, and Grammy Award for Best Score Soundtrack Album for a Motion Picture, Television or Other Visual Media. His score for The Sheltering Sky (1990) won him his second Golden Globe Award, and his score for Little Buddha (1993) received another Grammy Award nomination.

Sakamoto's visionary and genre-defying work as a musician, with his dozens of film scores, pop music, classical music as well as experimental glitch, has demonstrated universal appeal beyond Japan. His collaborations have included some of the biggest musical stars in the world, such as Michael Jackson, and prominent cultural figures, such as the Dalai Lama. He helped to shape musical thinking in the incorporation of electronic instruments. Sakamoto has also been an outspoken advocate of eco-activism. Among his film scores are those for Original Child Bomb: Meditations on the Nuclear Age (2004), a short film about the aftermath of the atomic bombings of Hiroshima and Nagasaki, and Alexei and the Spring, a documentary about a Belarus village 180 kilometers downwind of Chernobyl. After the Fukushima Nuclear Accident, he organized the No Nukes 2012 Concert in Chiba, Japan. 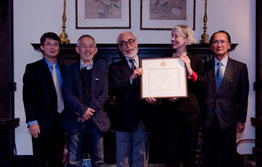 For nearly fifty years, internationally acclaimed filmmaker Hayao Miyazaki has been enchanting the world with fantastic, meticulously composed and emotionally soaring films, making him one of the world's most respected and revered animators and directors. Among the dozens of films he has written, directed and animated, his best-known and beloved include: My Neighbor Totoro (1988); Kiki's Delivery Service (1989); Princess Mononoke (1997); Spirited Away (2001; Oscar® winner for Best Animated Feature); and Howl's Moving Castle (2004; Oscar nominee for Best Animated Feature).

Miyazaki founded his now legendary animation studio, Studio Ghibli, in 1985, shortly after the release of his second major film, Nausicaä of the Valley of the Wind. After Studio Ghibli became a household name in Japan, it sought to bring their films overseas and built a partnership with the Walt Disney Company. In 2002, Miyazaki's masterpiece Spirited Away won the Oscar for best animated feature film — the first Japanese animated film ever to win the award. Audience reaction to Spirited Away was unprecedented. Roger Ebert of the Chicago Sun-Times heralded Spirited Away as: "..enchanting and delightful in its own way, and has a good heart. It is the best animated film of recent years... the Japanese master who is a god to the Disney animators." 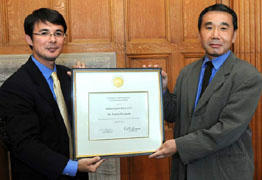 Claiming a global readership and internationally recognized as Japan's leading novelist, writer, and translator, Haruki Murakami is winner of the Yomiuri Prize for his critically acclaimed The Wind-Up Bird Chronicle. The author's numerous works, which have been translated into 36 languages, lead the reader along the interstices between the mundane and the sublime. His work has been described as easily accessible, yet profoundly complex.