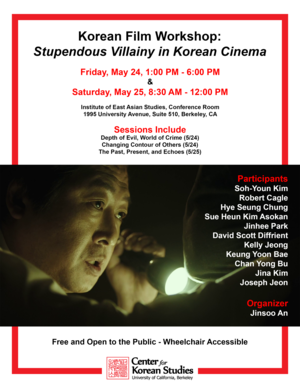 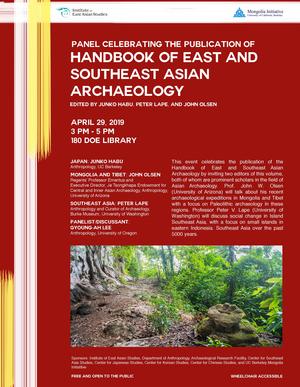 Summary: This event celebrates the publication of the Handbook of East and Southeast Asian Archaeology by inviting two editors of this volume, both of whom are prominent scholars in the field of Asian Archaeology. Prof. John W. Olsen (University of Arizona) will talk about his recent archaeological expeditions in Mongolia and Tibet with a focus on Paleolithic archaeology in these regions. Professor Peter V. Lape (University of Washington) will discuss social change in Island Southeast Asia over the past 5000 years. 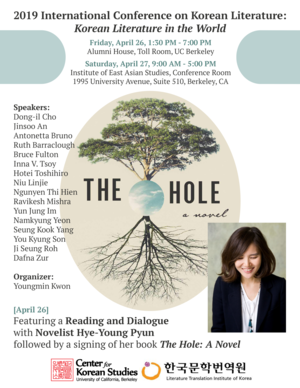 Bio: Pyun Hye-Young was born in Seoul, Korea in 1972. She majored in creative writing at Seoul Institute of the Arts and earned a graduate degree in Korean Literature at Hanyang University. She is currently a professor of creative writing at Myongji University. She made her literary debut in 2000 with her short story “Shaking off Dew”. She has published several collections of short stories as well as several novels, some of which have also been published in English. In her restrained, yet grounded writing style, Pyun Hye-Young’s works portray the insecurities of contemporary man and point to the hole of social system for causing this sense of alienation and isolation. She is noted for renewing herself piece by piece and building her own unique world of writing in the process.

Summary: A group of leading experts on China and American foreign policy recently released “Chinese Influence and American Interests: Promoting Constructive Vigilance,” a report documenting Chinese efforts to influence American society. The report examines China's efforts to influence American institutions, including state and local governments, universities, think tanks, media, corporations, and the Chinese-American community, and differentiates between legitimate efforts--like public diplomacy--and improper interference, which demands greater awareness and a calibrated response. The report also includes perspectives from other countries, including those in Europe and the Asia-Pacific. On Friday, April 19, contributors to the report, including co-editors Larry Diamond and Orville Schell, and outside experts will gather at UC Berkeley to compare and discuss the forms and effects of Chinese “sharp power” across Western, Asian, and African countries.

Note: This event was conducted solely in Korean. 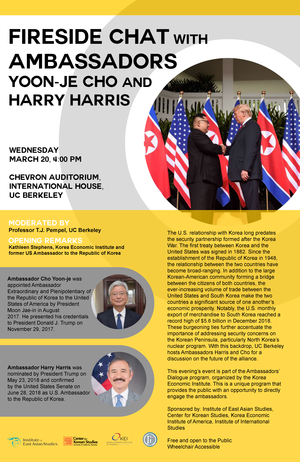 Summary: The U.S. relationship with Korea long predates the security partnership formed after the Korea War. The first treaty between Korea and the United States was signed in 1882. Since the establishment of the Republic of Korea in 1948, the relationship between the two countries have become broad-ranging. In addition to the large Korean-American community forming a bridge between the citizens of both countries, the ever-increasing volume of trade between the United States and South Korea make the two countries a significant source of one another’s economic prosperity. Notably, the U.S. monthly export of merchandise to South Korea reached a record high of $5.6 billion in December 2018. These burgeoning ties further accentuate the importance of addressing security concerns on the Korean Peninsula, particularly North Korea’s nuclear program. With this backdrop, UC Berkeley hosts Ambassadors Harris and Cho for a discussion on the future of the alliance. This evening’s event is part of the Ambassadors’ Dialogue program, organized by the Korea Economic Institute. This is a unique program that provides the public with an opportunity to directly engage the ambassadors. 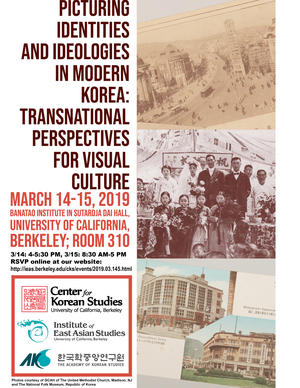 Summary: In recent years, scholars have noted a few topics of visual culture commonly found in East Asia at the turn of the 20th century. At this time, new forms of popular culture, including novels, magazines, and newspapers, as well as official public monuments presented a new image of the nation in the changing environment of world expositions and international congresses. Most of the essays in this conference tackle issues of hybridity, the mixing of the old and the new, the local and the foreign. Papers in this conference will also demonstrate how troublesome and confusing sometimes it was to “invent” or “reinvent” familiar artistic subjects for a new era. This gathering of scholars, hard to meet in one place, sheds light on the way in which visual symbols and fine arts of pre-modern Korea were re-encoded with a hierarchical system of modernity and associated with a more complicated set of modern identities.